November 22, 2018
With the release of the awesome new Task Force book for By Fire and Sword, I've been furiously working on various new units to be able to put larger forces on the table. Being starved for games lately, I set up a level-1 game (base+1 level) with my 9-year old. She helped me get through turn one and set up and I ran it solo from there. 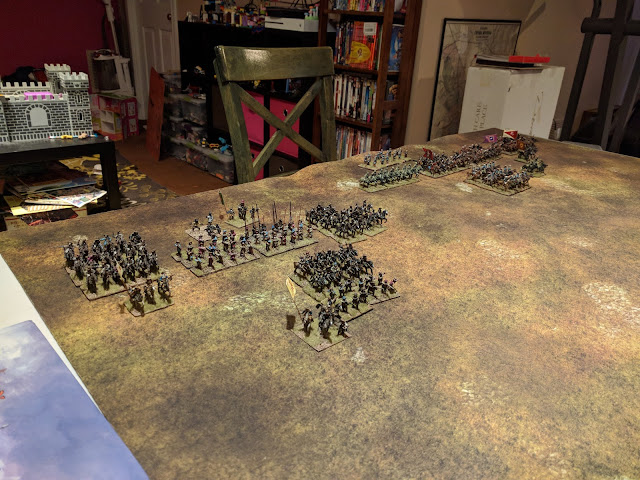 The scenario rolled up was 'Key Terrain Feature.' It is basically a pitched battle over two objectives, with 2 scenario points awarded for control of each (4 total), and 2-4 more points available for getting bases off the opposing table edge (up to 3 for troops, 1 for a commander). Each side can score no more than 6 points.

The PLC declined to purchase any tactics (basically additional effects you can choose) and instead rolled up march losses which caused the Swedish Dragoons to lose a base.

TURN 0/Reconnaissance phase
The opposing Dragoons square off and advance toward the village/hill. Nothing exciting happened.

With their superior number of units, the Swedes were able to wait out the Polish forces. They basically dropped their infantry battalion (pikes, musket, cannon) to slowly overtake the hill while the Polish were forced to deploy relatively centrally. My daughter did make a bold commitment of the large national reiter unit (with forced march) to basically streak down the Polish right flank and threaten an easy 2 scenario points. The Polish would need to commit either their very valuable Hussars or their flanking Cossacks.

The Polish moved the hussars stop the streaking reiters from simply waltzing off the far edge (I should've kept them in column. The extra move might've made it impossible for the hussars to really stop them, forcing the cossacks to come in from the flank in defense).

Meanwhile, the Polish dragoons were driven back by case-shot from the regimental gun and musketeers while the cossacks/pancerni slowly moved forward. The pancerni took the village.

The flanking cossacks failed their skill test and so would enter the field at the end of turn 2.

On the PLC right, the hussars and national reiters clashed, with a base lost by the reiters and the hussars driven back.

In a stoke of luck for the Polish, the entering cossacks caused disorder amongst the national reiters, giving the hussars another chance to stop their end-around maneuver.

Mostly maneuver this turn as the battalion continued to advance, the cossacks and dragoons pulled back across from them, and the pancerni and armored reiters moved up to engage to the south of the village (with a nice arquebus volley causing casualties amongst the Polish cavalry). The Swedish dragoons still didn't want to take the village (I should've moved them into the buildings...) and the newly-arrived cossacks moved to get behind the armored reiters should they retreat.

The hussars repositioned to block the national reiters, who rallied and prepared for another clash.

Finally the battle is joined in earnest!

The cossack-style charge the Swedish dragoons, surviving defensive fire and flank musket fire, only to fight to a draw.

The Polish general and pancerni break the armored reiters with some excellent rolls, but can't cut any of them down on the pursuit.

In the south, the hussars and national reiters go back and forth for 2 rounds. The hussars withdrew in disarray and prepared for the next charge.

At this point, the hill is safely in Swedish hands, while the village is probably going to the Polish.

The armored reiters failed to rally, leaving the cossacks to mop up the dragoons while the battalion consolidated on the hill.

In the south, the hussars gave it one more go before routing off the board.

The casualties did cause the Swedish task force to reach a breaking point for its motivation level, but all remaining units passed their morale tests heading into turn 6 and no further fighting was possible.

The national reiters + colonel and big cossack-style unit left the board, bringing the battle to an end.

Casualties - acceptable losses for both, leading to a true draw!

This was an excellent battle, even running it basically solo. The larger units made the clashes a little more forgiving, and even at a 'smaller' size for the level of game, it felt very dynamic.

Hussars are pretty nuts, although they are extremely vulnerable and costly to lose in terms of motivation.

Battalions are an ugly nut to crack. I wonder what would have happened if the flanking cossacks had arrived on that side...although they did not have a commander to give them a charge.

It was nice having a senior commander with 30cm command range on the table!

Looking forward to a true game with a full-time human opponent soon!